Over the years I’ve worked with many talented and visionary art directors and publishers. Two unique groups of individuals that come to mind are Will Hopkins and Mary K. Baumann of Hopkins/Baumann who designed and art directed Kids Discover magazine, and Susan Williamson of Williamson Publishing. Collectively, both were an absolute dream to work with. They allowed me to flex my creative muscles, yet rarely intervened with my artwork. To reward this Carte blanche, I produced the most thought-provoking and evocative illustration for children that I could possibly muster; all correct and on time.

Things change however. Print publishing was in a conundrum before the recession hit, so the good times are on hold, for a bit anyway. Lately I’ve been forced to seek out other sources of income along the lines of my profession. What follows is an account of what transpired when I was recently contacted by a new client. I include the original sketches and the marked-up revisions. If you choose not to read the entire piece, I can sum it up by saying that 1) design by committee is not an enviable work environment, and 2) giving someone the title of art director does not make it so. I’ll begin…

These are the 4 original “sketches,” though the color version may have been lifted from somewhere, and the other 3 looked suspiciously like they were executed by a very capable artist who quite likely—upon hearing what the client was willing to pay for finished, 4-color art—refused to do any further work (it should have been a clue). There’s also a style sheet of sorts attached, with some innocuous instruction. Each was to be drawn in Illustrator. Click the thumbnails for a larger image. The art direction on this piece? “Vector me.” So much for the initial step of the project. To make sure we were on the same page style wise, I rendered one of the gingerbread persons and sent it off for some feedback. The client’s notes are in red (with my own subtle commentary). I received the following note:
• I changed the two layers you had to one layer (? it only had one layer) and applied the inner glow effect. This will make it so much easier. (for whom, and make what easier?)
• I also changed the red icing to white to brighten him up and a little shadow under the hat to separate the hat from the white icing.
• I know some of the icons have dashed smiles and some have solid so let’s just make it consistent and make them solid. Also on the cheeks I did a solid color and applied the feather effect to it. (So much for simplicity.)

Easy enough, right? I began in earnest on the pages in order and sent them off for approval and/or some tweaking. What I received back was, ummm, interesting. I’ve worked on magazines and other types of print media for many years, and always come to expect changes of some kind. I know it sounds funny, but people are only human. Quite often, one doesn’t know what one wants until one knows what one doesn’t want. It could have been an easy round of alts had not the client bypassed their own specs (keep shapes and colors simple, use our color chart, etc.). I began to grow a bit suspicious, and so began keeping alternate versions of my artwork, as these “relationships” often wander back to some previous iterations when the client finds that their ham-fistedness often makes matters worse. I also discovered at this point that the client was opening these images in an older version of Illustrator, causing all manner of odd things (layers, blends) to shift. But I adjusted. Steeling myself for the inevitable, I jumped in to the next round with a little less naivety. Take a look… Not sure where the green background came from on this version. Whatever... When an art director mentions that something needs more or less contrast, I understand. When an art director says “Don’t get things too close to the gutter,” I accommodate. This hurts my eyes, Tonal sugar dots, and Still aren’t working however are terms that my teachers and fellow students never discussed in Design 101. It was at this point that I discovered (Eureka!) that their color palette and call for simplicity was just a suggestion… kind of like a “reddish” stop light. All was not dire though. I amused myself throughout the project by counting the numbers of different colored pens (by association, people) that were employed on the markups.

Once again, I dove into the work. Two days later I received the following:

Mike, Just a few minor tweaks on a couple pieces…
• gingerbread puzzle: cmas trees in background the two greens need to have less contrast. (I know but it’s what you asked for.)
• Make the texture more subtle. (There is no texture anywhere, and by the way, what are you referring to?)
•Gingerbread sleigh puzzle: Make the bag in the sleigh green and the green presents red. The bag blends in with the red on his clothes and you can’t tell where one starts/stops. (I know but it’s what you asked for.)
• Peppermint candies: no orange/red combination
• Gingerbread girl: close red coat on dress so you don’t see white stripe running up middle of girl

The artwork finally did go out, perhaps because Christmas is coming up quite rapidly (thank God). I filled out the contract which put $415.00 onto my accounts receivable, and signed off on a project that was a “work for hire only” and essentially guaranteed that I no longer had any rights to the work whatsoever.

I’ll not mention the client’s name here, but it suffices to say that they hired a professional whom they treated like a grade-schooler (with no offense to grade-schoolers). Had they told me what they wanted and left it at that, I would have produced pieces of art that 1) they would be proud of, 2) I would be proud of, and 3) would have done very well in the market, as my 20+ years of experience and countless awards attest to.

Hoping this never happens to you,

A few days later I was contacted once again by this client, so I thought you might enjoy the conversation and the eventual outcome. Just to be clear, I never list the name of the client, and I changed the names of those involved to protect the, ummm, innocents. Their notes are in red, mine in black. Enjoy and learn.

Hi Mike!Are you available for a quick vectoring job? I will attach the style we need
to match to. There are numerous icons just like the ones shown. 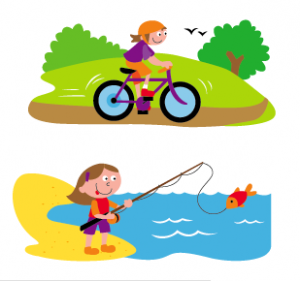 If you are available I will ask Ally to send you the pencils & fee schedule.
Thanks! Genny

Depends on the number of items needed and the fee. The last batch (Christmas icons) was way too much work for what XXXXXX was paying.

These are much, much simpler (see attached, we need to match to a tee). The fee is $275.00 for 24 icons. Ally was out of the office when you had that last job. Normally she makes a lot of the tiny changes herself. Is it worth giving it a shot to see if this time it is worth your while? Also, we have an approved color palette, so you would have to chose from that… I’m so sorry about the last job. I hope we can make it up.
Let me know!G.And Ally has said she will make all your tweaks on this… (to make up for the last disaster)

I took a look at the degree of involvement and simply must decline your offer. I would however offer to do these for $850, with one round of changes, and one round only.

I know you are in an awkward position and are only doing what is asked, but the fee XXXXXX is offering borders on less than minimum wage, so it’s not possible.

If this doesn’t go (and I’m guessing it won’t), I really hope you can find someone willing to take this on. Again, my apologies. I do hope you find some quality time for yourself around the holidays, and away from work.

I understand completely.  Should I contact you on any higher paying jobs do you think? I hope you & your family have a good Christmas. Please stay in touch, Genny

Sure. I still love to draw and hope to be doing so for some time. I’m sorry you’re getting caught between creatives and management. Hope it works out. And I will keep in touch.